NiteRider understand lights are an integral part of your daily commute. Using a light can mean the difference between being seen or not by automobile drivers. Many of the “entry level” commuter lights are nothing more than “be seen” lights. Your overall safety and visibility should not be limited by your budget, that’s why NiteRider created the Mako Series. The Mako line offers four models and up to 250 lumens, not only allowing the cyclist to be seen, but allowing the cyclist to see as well. A favorite feature is the side “gills” that emits light, it not only looks cool, but makes the Makos more visible. The Mako line is easy on the wallet and easy to operate.

The TL 5.0 SL has five ultra bright LED’s with four different operating modes, including three different flash modes. New for 2015, the amber Side Lights help to provide even more visibility from the sides of the rider. The TL 5.0 SL will help keep you safe and seen from behind (180 degree visibility). The TL 5.0 SL operates on 2 AAA batteries (included) for up to 100 hours on flash. 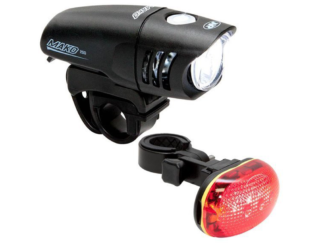